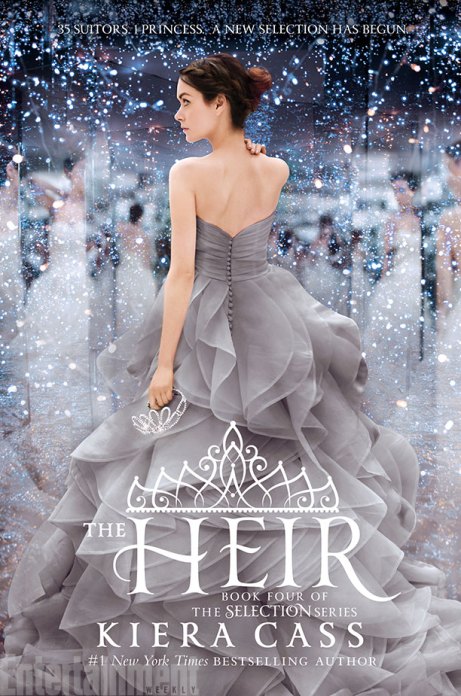 Remember how I said this book was going to yank me out of my reading slump? Well, it most certainly did. Forcefully, I might add.

It took 2 pages for me to be sucked back into the world of Illea and to fall in love with the new characters. I’m not even gonna bother waiting until the end of this review to share my rating because it’s going to be obvious. Painfully obvious. This is a solid 5-star book for me. If more stars were possible, more stars it would have.

So, if that’s all you came for, there you have it. For anyone else interested, here’s my Ode to The Heir:

I’m having such a guttural response to this book. It’s everything the original trilogy was and more. So strong is my emotional connection that I am currently writing this review on my phone, in my car, in the parking lot of the coffee shop where I just read the final page. It simply could not wait.

We launch into the story by meeting Eadlyn, the 18-year-old daughter of Maxon & America (*swoon*) and heir to the throne of Illea as the firstborn who beat her twin brother, Ahren, out of the womb by 7 minutes. We learn how much Illea has changed since her father began his rule – his first order of business obviously being to eliminate the caste system. We also learn of the unrest among the newest generation of citizens due to the older generations’ inability to move beyond the labels imposed by the abolished castes. There is significant discourse, which really sets us up for this new Selection.

Eadlyn is a vastly different character from America, as most young women are from their mothers. She is growing up in the palace and, as such, has led a very different lifestyle than her mother did. Her priorities lie with the entire kingdom, rather than just her loved ones. The weight of that responsibilty weighs on her from the very beginning. I will admit that she is certainly, on some level, spoiled; but I don’t know that I would go so far as to consider labeling her entitled. She has a flair for fashion and she prizes her tiaras more than one might consider acceptable, but she is simply playing the hand she has been dealt – which is a very powerful hand. She has a confident yet reserved attitude when dealing with other people – never really letting anyone in besides her immediate family.

Ahren is the ultimate voice of wisdom to Eadlyn’s constant self-doubt & confusion. He is so easy to adore & Eadlyn does so with every fiber of her being. His ability to be simultaneously gentle & straightforward is a complete godsend to Eady once the Selection actually begins & things start to get complicated.

The Selection boys – I don’t really want to talk about anyone in particular, for fear of spoilers. I do have my favorite ship. And a backup ship. And maybe another after that, but not really. I’m a multi-shipper & I’m ok with it. I will say I love the variety of the contestants. The different motivations they have & their personalities are so vibrant. And having a palace full of boys certainly does make things interesting.

Maxon & America. I can’t. I just can’t. These two are my favorite fictional couple of all time, I think. And they only got more adorable over the fictional 18 years that have passed since the end of The One. They are so wholly devoted to each other and to their children. It’s terribly heartwarming and gives me ALL. OF. THE. FEELS.

Returning characters, for those of you who read the first books: Aspen & Lucy, Marlee & Carter, & May Singer all have supporting roles in this book. That’s all I can specifically remember, at least. I feel like maybe I’m forgetting someone? Either way, it’s nice to catch up with them & see how their lives have also changed since the conclusion of The One.

Ok, so Eady is not into the idea of having a Selection, but is convinced to participate because it will distract the Country from the unrest that is beginning to get out of control. She is incredibly independent and has no desire to find a soulmate at this point in her life, but we all know things like that can change when the opportunity to find love presents itself. She spends a lot of time second-guessing herself, but also doesn’t seem to fully consider the consequences of her actions or the way they will be interpreted by the masses; this makes for some very interesting turns of event throughout the entirety of the book.

This book flew by way too quickly. At the end, I turned the page, saw the acknowledgements, and stopped breathing. I wasn’t ready for it to end. It was so fast-paced and I was never – not once – uninterested in what was going on. Eady’s character development throughout the story is some of the best I’ve ever read over the course of a single novel. The current state of Illea is very realistic, considering what the country has been through over the last few decades. I can’t recommend this book enough. Even if you haven’t read the first 3 books, I believe you could jump in here since the backstories of the other characters aren’t really discussed, just alluded to – more as treats for fans of the original series, I feel. Everyone who loves a good dystopian-ish fairy tale should definitely pick this up. Thank you, Kiera Cass, for not only NOT letting me down, but for exceeding my wildest expectations.  I believe this is my favorite of the entire Selection series. Now to count the days until book #5…

PS – For fellow fangirls: Did you hear? Kiera Cass announced on her blog that Warner Bros. has won the film rights for The Selection! Who else is excited about the possibility of seeing The Selection come alive on screen? After the CW pilot fiasco, I had essentially come to terms with the fact that it would never happen. Now it still could & I am giddy. Fancast for America? Sophie Turner, of course. She’d be absolute perfection. Oh my god, this is a long PS. BYE!

2 thoughts on “[Book Review] The Heir”