Fair warning: this is going to be an ode to a book. If you’re not about that life, you’ll probably want to click away from this page right now.

As I am writing this, I literally finished reading I’ll Give You The Sun approximately 15 minutes ago. Everything is fresh. Everything is vivid. This book… it’s like Jandy Nelson took a chunk of my soul and formed it into a story. That’s not to say that it’s about my life; I’ve never experienced really anything that happens in this book. But I felt it – deeply and powerfully.

Let’s take a look at my Goodreads updates: 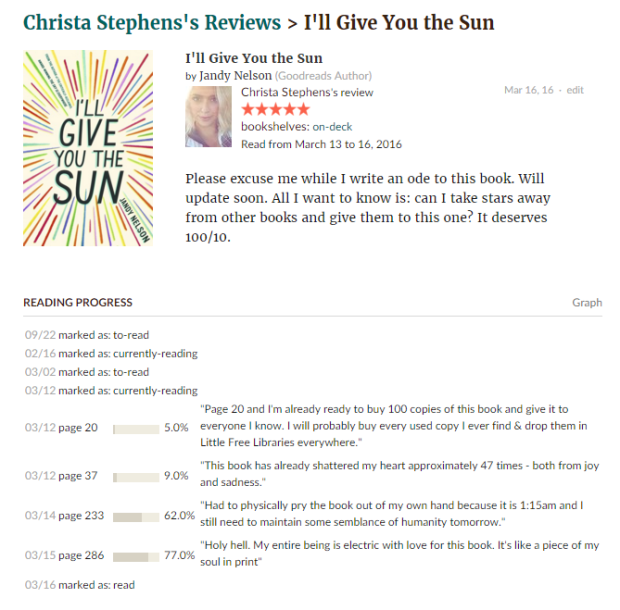 You know how there are some books that get hyped and hyped and hyped and you’re SO excited to read them, and then you do and it’s just… meh? I was afraid that was going to happen here. After SO many recs, I honestly didn’t expect much. I kept putting it off because of this. But at the same time, it feels as though this week was probably the most perfect time for me to read a work of art. Honestly, that’s a story for a different day. Maybe this will be a two-part ode… but I really needed it this week.

So, the synopsis for the book, as found on Goodreads and Amazon goes something like this:

Jude and her twin brother, Noah, are incredibly close. At thirteen, isolated Noah draws constantly and is falling in love with the charismatic boy next door, while daredevil Jude cliff-dives and wears red-red lipstick and does the talking for both of them. But three years later, Jude and Noah are barely speaking. Something has happened to wreck the twins in different and dramatic ways . . . until Jude meets a cocky, broken, beautiful boy, as well as someone else—an even more unpredictable new force in her life. The early years are Noah’s story to tell. The later years are Jude’s. What the twins don’t realize is that they each have only half the story, and if they could just find their way back to one another, they’d have a chance to remake their world.

And, yeah, that’s kind of what it’s about, but it also barely scratches the surface. I understand why it’s written this way – and I honestly don’t want to say much more about the plot for fear of killing some of the reveals – but seriously, people. Not even close.

First of all, there’s Noah. Noah is the cinnamon-rolliest cinnamon roll to ever roll cinnamons. Fact. He sees the world through an artist’s eyes, and consistently emotes using titles of hypothetical paintings as a prominent part of his inner monologue. Let me tell you, I could always see the painting in my head. Noah resonated with me in the very core of my being. I’ve never loved a fictional character more.

Jude, on the other hand, I struggled with. But only in chapter 1, which is told from Noah’s point of view. To be fair, they’re both pubescent in chapter 1. Age 13 isn’t easy for anyone. Especially girls. By the time we get to 16-year-old Jude’s point of view in chapter 2, everything changes. She’s no longer the normal, popular, flirtatious girl we met in chapter 1, and so begins the unraveling of the true story.

IGYTS contains more passion, heartbreak, honesty, and hope than any work of fiction I have ever experienced. It took me 3 days to read. I could have done it in one sitting if I could have A) kept my emotions in check and B) read it consistently without stopping on every page to talk to somebody about something that just happened. No joke. This is a thing I did. I’d say I talked (in person) to or messaged  a total of 15 different people during the course of the last three days. All to talk about this book. And only maybe 3 of them had read it before. Basically, I am pushing this book on everyone I know. Shamelessly.

As if I even need to include this, my final rating for
I’ll Give You The Sun by Jandy Nelson:

UPDATE (20 minutes later): Apologies for the utter word-vomit that is this review. I had some feels and I had to get them out. If you don’t understand, then you have no soul.