You guys, I have missed my 5 Fandom Fridays for the last couple weeks! I really love this link-up, so I’m super glad to be participating again! This week’s topic is 5 Games I love to Play, and while I’m not a huge video-gamer – specifically because my hand-eye coordination is SO terrible – there are a few, plus some tabletop/card games that I get seriously excited over.

1. Cards Against Humanity. I think we have played this at every party we’ve had in the last 2 years. It’s so much fun to play with all different kinds of people, because you never know how depraved your friends & family are until this game comes out. We have the original game, plus 3 CAH  expansions and one Crabs Adjust Humidity 3rd party expansion. We even invested in the Bigger, Blacker Box to store everything. We’re hardcore about it. If you’re not familiar (have you been living under a rock?!), the gameplay is identical to Apples to Apples, but  the cards all contain pretty questionable and oftentimes sexual / politically incorrect / offensive statements. This is definitely something you want to keep 18+ – and while you might think it’s not a game to play with grandma, you’d be surprised how much fun that can actually be!

2. Game of Thrones. This is one video game that I actually manage to play – mostly because the interaction is primarily conversational decisions. It’s like an interactive movie, which is totally up my alley. I’ve only played through the first episode, but I watched my husband play through episode 2 and I’ve heard that episode 3 is really good. I just need to find time to get to them! What I love about this game is that it ties into the show without actually affecting the narrative of the show. It’s a completely separate side story, following a family that we don’t see onscreen.  I’m also a huge fan of the stylized graphics. Telltale also makes a Walking Dead game that I’ve watched my husband play and it’s obviously really good, too, but the creep-factor is a lot higher and I feel like I’d be too jumpy to be successful at that one. 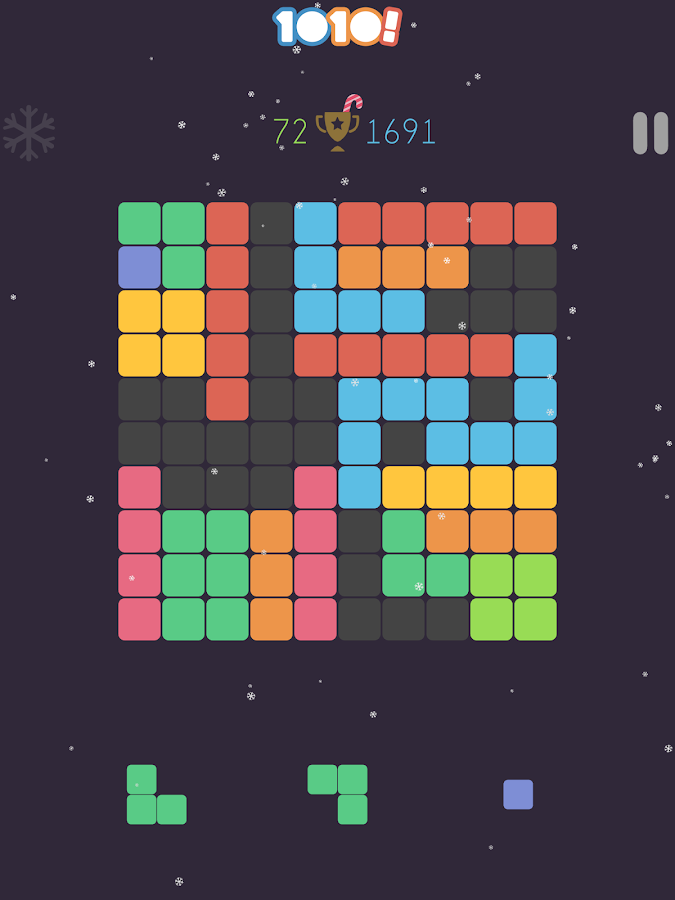 3.1010! This is an iPhone game I found that has me SERIOUSLY addicted. I’m usually playing anytime I’m sitting on the couch watching TV, waiting at the doctor’s office, or pretty much anytime I have a little downtime. This is what I call a zen version of tetris. You have a grid and you’re given 3 pieces at a time that you can play anywhere on the board. You’re still trying to clear entire lines like Tetris, but the time restrictions have been eliminated. It sounds easy – and it is for the first little while – but it gets harder as you play because your pieces don’t fall once you’ve cleared a line.  If you haven’t played it, you should. But I’ll warn you, it’s like crack.

4. Pokemon. Yes. I love Pokemon games. If I start playing one, I can get so wrapped up that I’ll spend 3 days in a row playing for 5-6 hours after work. That’s probably not a good thing to admit on the internet, but that shit is addictive. I’ve loved Pokemon since the first time I saw my friends at summer camp pull out a deck of cards & start battling. I collected the cards for YEARS and eventually gave them to my high school boyfriend’s little sister, because I thought they weren’t cool anymore. That’s probably one of my most regretted decisions (*moment of silence, please*). Over the years, I’ve played through the Red, Yellow, and Blue games and when we bought kiddo her Nintendo 3DS for Christmas, I begged for Pokemon X/Y so I could play it.  As soon as kiddo learns to read, I’m getting her started. She’s already obsessed with the TV show and even asked Santa for a Pikachu for Christmas. 🙂

5. Peggle. Haha ok. I hope I don’t get judged for this. I LOVE Peggle. It’s so satisfying to take your shot & watch the ball bounce around the screen. The graphics are all psychedelic and the music is trippy, plus the characters are so over-the-top cheesy. It’s just super entertaining. My husband and I get pretty competitive & see who can get the highest score on a certain level or do the side challenges to see who can do it better. I think I love it so much because I actually stand a chance at beating him at this, where I’d never beat him at almost any other video game, ever. It’s nice to have something to  cling to.

If you can’t tell, I gravitate towards things that are low-stress and don’t require strong reflexes. I get really anxious during timed games, which makes my already abysmal accuracy just take a nosedive and I’m essentially less functional than a toddler. That’s a fact. So, I’ll stick to turn-based games and tabletop games.

I can’t wait to see what the rest of you love to play – I hope there are some good tabletop games listed, because aside from the mainstream, I’ve never really played one. It’s something I’ve been interested in trying for ages. Somebody give me some recommendations! In the meantime, you can head over to Super Space Chick‘s awesome fortress to check out everyone’s lists!